Commissioned by the Trustees of the National Portrait Gallery and made possible by J.P. Morgan through the Fund for New Commissions

A newly commissioned portrait of Sir Tim Berners-Lee, the inventor of the World Wide Web, has been unveiled at the National Portrait Gallery, London, it was announced today (Thursday 28 May 2015.)

A painted bronze sculpture, by artist Sean Henry, shows Berners-Lee standing at two-thirds life-size on a tall plinth, carrying the leather rucksack in which he keeps his laptop. Apart from photographs, it is the computer scientist’s first commissioned portrait.

Sean Henry spent two days with Berners-Lee in Boston, observing and photographing him at work and visiting him at home, before inviting him to two further sittings at Henry’s studio in Britain.

Commissioned by the Gallery in celebration of Sir Tim’s 60th birthday, and made possible by J.P. Morgan, the selection of Sean Henry to make a painted sculpture came out of discussions with the sitter and his wife, and the wish to move away from the usual photographic depiction of Berners-Lee seated before a computer. This has resulted in the Gallery’s first commissioned portrait sculpture for seven years.

Rosie Broadley, Associate Curator, National Portrait Gallery, London, says: ‘Henry was interested in the paradox inherent in the impact of Berners-Lee’s invention and his self-effacing demeanour. Henry’s sculpted figures are usually anonymous, and in this portrait he has retained the idea of his subject as “everyman”, through the casual pose and clothing. The depiction of his sitter is resolutely contemporary, but the use of bronze has a timeless and permanent quality appropriate for a sitter with such a significant legacy.’

Sir Tim Berners-Lee invented the World Wide Web in 1989, a computer technology which has become the most powerful communication medium in the world. His invention has impacted on almost all aspects of contemporary life in the developed world including the dissemination of news, information and research; how we learn, shop, participate in governance and conduct relationships.

Born in London in 1955, Berners-Lee graduated from the University of Oxford with a degree in physics in 1976. In 1980, he joined CERN, the large particle physics laboratory in Switzerland as a software engineer, where he recognised that scientists needed better ways to exchange data with colleagues. His 1989 proposal for the World Wide Web combined two emerging ideas – the Internet, a network of connected computers; and hypertext, the concept of linking texts to other texts – to create a ‘Web’ that makes information easily accessible and shareable by everyone. After designing the fundamental technologies, Berners-Lee then worked to ensure that the code underlying the Web was made available for free to everyone, in perpetuity.

Today, Sir Tim continues to work to enhance the Web. In 2009 he founded the World Wide Web Foundation which seeks to establish the Web as a basic right and ensure it truly benefits humanity. He is also director of the World Wide Web Consortium, which oversees standards in Web development, and co-founder of the Open Data Institute, an organisation dedicated to enhancing the supply and use of government data by citizens. He is a Professor of Engineering and Computer Science at Massachusetts Institute of Technology and also at the University of Southampton. He was knighted in 2004 and received the Order of Merit in 2007.

The artist Sean Henry studied in Bristol and California, and his work is part of a number of international collections. Henry’s outdoor installations include Walking Woman (2013 Ekebergparken, Oslo, Norway), Catafalque (2003, Meijer Gardens, USA) and Couple (2007, located off the coast of Northumberland at Newbiggin Bay, England).

Sir Tim Berners-Lee says: ‘The Web connects people, not just computers. It belongs to all of us and its future will be shaped by the energy and creativity of all who use it. So, I hope that this sculpture will start conversations – our work is not done. What kind of Web do we want, and how best can we build that together?’

Artist Sean Henry says: ‘Tim is a very dynamic person to sculpt, as he has a very active mind, and is active physically too. Above all what came through was his strong sense of purpose, and it felt important to try to capture this in the work.’

Dr Nicholas Cullinan, Director of the National Portrait Gallery, London, says: ‘We are so pleased to be able to celebrate Sir Tim Berners-Lee’s sixtieth birthday with this striking sculpture, the first Gallery commission in painted bronze. It is fitting that we should acquire such a remarkable portrait of a person who has quite literally changed the world not only through communications and computer science but through his ongoing work to harness the World Wide Web to the greater good of society. Our thanks go to Sir Tim and artist Sean Henry for their vision for this portrait and to J. P. Morgan for making it possible.’

Sir Tim Berners-Lee by Sean Henry is on display in Room 40 at the National Portrait Gallery from Friday 29 May, Admission free.

Commissioned by the Trustees of the National Portrait Gallery and made possible by J.P. Morgan through the Fund for New Commissions 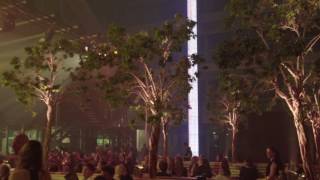